“Inspiring, exceptional students,” and “pride in our community” where just some of the words shared by those who attended the 2016 RTC Foundation’s Student Success breakfast March 24th.

It was the most successful RTC Foundation event ever with 280 people in attendance – a 60% increase over last year. The outpouring of community and business support, including $41,000 in sponsorships, helped to raise over $70,000 – an increase of 150% from 2015.

With this level of community support, we can now double scholarship support for students over the next academic year from $56,000 to $126,000!

The event was hosted by Emmy Award winner Meeghan Black, and featured Keith Leverkuhn, Vice President and General Manager for Boeing’s 737 MAX airplane. In keeping with the 75th year theme, the event also was attended by one of the original “Rosie the Riveter” factory workers, 95-year-old Georgie Kunkel.

The Student Success Breakfast drew attendance from local and state leaders, including Renton Mayor Dennis Law, who spoke at the event to officially proclaim March 24, 2016, as Renton Technical College Day.

Leverkuhn gave a powerful speech about the joint history of the Boeing Company and RTC in developing the Puget Sound’s economy and its industrial work force. Early in his speech he asked attendees to raise their hands if they had direct or casual connections with Boeing, and a sea of hands responded.

“What you see here is the intersection, at a macro level, of Renton Technical College and the Boeing Company,” he said.

A full 43 percent of RTC’s aerospace program graduates ended up working for Boeing in the past four years, Leverkuhn said.

Jon Holden, President of the Machinists Union District Lodge 751, also spoke at the event, where he announced that the union will establish a $25,000 scholarship endowment at RTC. The funds will help prepare students for careers in aerospace manufacturing.

The Student Success Breakfast featured several students who overcame tremendous obstacles and succeeded at RTC, thanks in part to scholarships supported by local donors and businesses.

Kiwi Ijiomah, one of those students, recalled her difficulties in the United States after emigrating here years ago from Nigeria. Early into her experience, she ended up mired in the foster care system, moving from home to home and struggling to make ends meet.

When she attended high school, someone pointed out that she could pursue college classes at RTC through the state-funded Running Start program. She was soon impressed with the level of attention she received at the College, and with her faculty and peers.

A scholarship at RTC made it possible for Kiwi to enroll in the computer science program, which led to a 19-year career in information technology and security.

“That scholarship was my lifeline, at a time when I can’t even describe the chaos around me,” Ijiomah said. “My success here is nothing short of miraculous.” 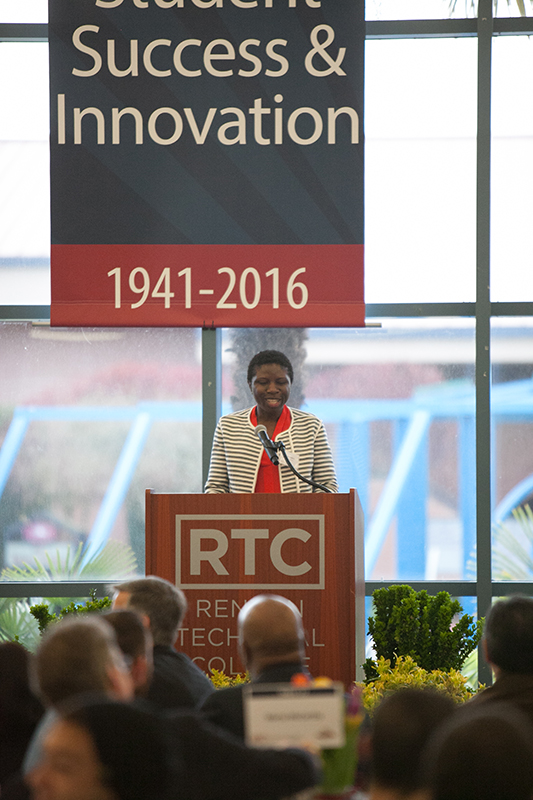 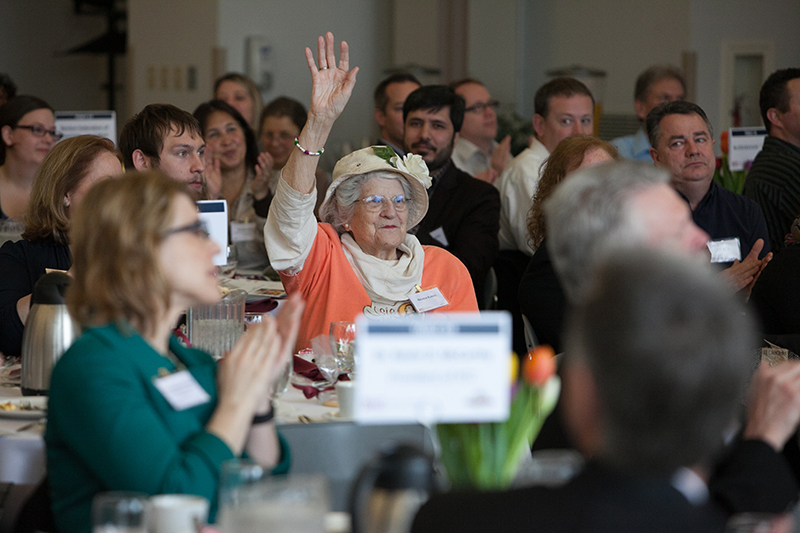 Georgie Kunkel waves to the crowd. Georgie is one of the original Rosie the Riveters during World War II who worked at the Boeing plant.