For Bernadene “Bernie” and Denny Dochnahl, their most celebrated title is that of Community Investors. As longtime residents of Renton – having lived within a seven mile radius for over 50 years – their shared history and imprint on the greater-Renton community is everywhere.

At the RTC Foundation Student Success Breakfast, Feb. 14, the Dochnahls were honored by the Foundation Board of Directors for their community leadership and generous support for the college with the 2018 Lifetime of Giving recognition.

“If you spend time around Bernie and Denny, it doesn’t take long to see that one of their greatest joys is to help others succeed in life and to reach their highest potential,” shared Dr. Kevin McCarthy, Renton Technical College president. “They were here in the beginning when the RTC Foundation first began and they continue to invest in the college’s mission to create educational opportunities for all students.”

The Dochnahl’s involvement with Renton Technical College (RTC) began in 1993 with Denny as a founding member of the RTC Foundation board, now emeritus, along with the late Norma Cugini and Pat Newbury. This was also the start of their involvement with the now famous Blue Ribbon Committee, a gathering of leadership from the city, school district, chamber of commerce and the college who came together to initiate change.

The main focus of the leadership group was to work together to promote and advance Renton and marked a historical change in the way Renton would view itself and its vision for the future.

“At that time few people knew about the great work the college was doing,” shared Denny, “We set out to change that and to recognize the value of the college and what a community asset it was.”

For the Dochnahls, education, career training and especially lifelong learning have been central to success. Friends often share that they are big believers in every person’s ability to love unconditionally, overcome obstacles and to achieve great things – the main reasons why they have been a part of RTC’s history and success on so many levels.

“Education maximizes a person’s potential and helps them to be their better selves. The college adds great value to the local economy and the multi-ethnic student population helps everyone to realize and touch the greater world.”

Their desire to see others reach their full potential is truly embodied in the story of a young woman named Kiwi Ijiomah.

The Dochnahls met Kiwi while interviewing candidates for a Renton Rotary scholarship. This meeting changed the course of Kiwi’s life. Not only did they invite her into their home, they also encouraged her and provided excellent counsel. In time, their relationship grew to be as parents and child – family names they call each other even to this day. Kiwi is now a successful Retail Systems Administrator with Seattle-based clothing and home furnishing manufacturer, Tommy Bahama.

In addition to their love of community and “investment in people,” the Dochnahls have stellar resumes and accomplishments. For Bernie, serving as one of Puget Sound Energy’s first female Vice Presidents and starting ANEW, which helps to prepare women for careers in the trades. She is the founding member of the Center for Women & Democracy, a leadership training for women, and serves on the Boards of Harborview Medical Center, Valley Medical Center, and the UW Medicine Board of Trustees. Both Bernie and Denny have served as Board members of the Renton Chamber, Denny as president and as founding board members of the Renton Community Foundation.

Denny is hailed for his entrepreneur’s spirit, purchasing his first property at 18, developing and re-developing residential and commercial properties and building successful construction, trucking and excavating companies.

However, when you ask Denny what he does for a living, he simply replies, “Dirt is my life.”

Even with their remarkable business, real estate and professional success, they will always underscore their most treasured title of Community and People Investors. 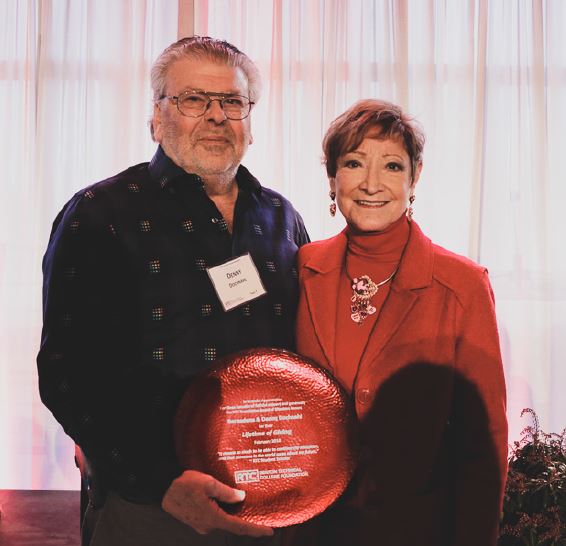 Bernie and Denny Dochnahl received the 2018 Lifetime of Giving Award.