On Nov. 10th the RTC Demonstration Kitchen came alive with 48 guests and the laughter of Seattle-based Chef Shota Nakajima. The event was RTC Foundation’s first in-person fund-raiser since January 2020 and raised over $65,000 to support culinary students – the most raised since the dinners relaunched in 2017 in honor of the late Norma Cugini.

RTC students prepared the dinner and had the opportunity to cook with and learn from Nakajima and his Culinary Director Nick Springer. “This is an important event for the culinary industry,” Nakajima said acknowledging the value of the evening to students.

A rising star on the national stage, Chef Shota’s good-natured chuckle and cheerful demeanor earned him the title of Fan Favorite during the 18th season of Bravo TV’s Top Chef, and his exquisite Japanese cuisine a slot in the finals of the hit show.

Nakajima answered questions about his road to success, his time on television, and his hopes for future chefs, as he demonstrated his black cod dish with his signature three-ingredient puree that won him acclaim on Top Chef.

His road to success?

“School was hard for me, but working in the kitchen, giving every-thing I had, showing up on time, made me feel successful,” he said.

After dropping out of high school, he returned to his native Japan to learn the art of Japanese cuisine, working with acclaimed and Michelin Star-rated Chef Yasuhiko Sakamoto. He achieved his goal of opening his first restaurant in Seattle, Adana, by age 25, and then opened his second, Taku, a few days before the COVID-19 shutdown. Closing Adana, being alone during quarantine, and then reaching fame on Top Chef, all gave him time to re-evaluate what he wanted to do.

“My inspiration is making sure people become the best versions of themselves,” he said. “I would rather people aren’t afraid to make mistakes, because that means I’m a good boss. I want to teach those who work for me to have self-value, because that wasn’t taught to me early.”

He told culinary students to seek those who share those values:

“Surround yourself with good peers, good vibe people who motivate you and help you push your dreams.” 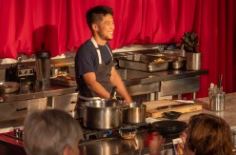 Chef Shota demonstrates his award-winning Black Cod entree for dinner guests with lots of laughter and great conversation added to the mix. 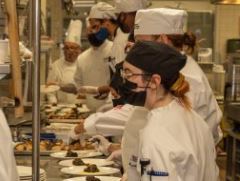